My Dream Job as a Fashion Designer Turned into a Nightmare 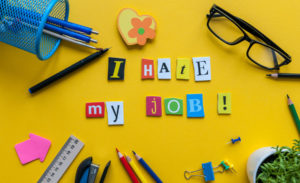 You wanted to work in fashion for as long as you can remember. And maybe you even landed your dream job as a fashion designer. But after a while, you realize this fantasy life isn’t so dreamy after all.

I understand. I went through the same thing you are for years.

My story is long.

Yesterday, we started with how I built what I thought was my dream fashion brand but instead built a business and life I hated. Instead of designing and creating, I was doing the grunt work of running a business selling products I grew to loathe.

And even though I’d grossed $40k in my third year of business (a number I was pretty proud of as a mid 20 something with no fashion industry or business experience), only $8k was profit.

Only $8k was left for me as a paycheck. And that’s not enough to live on.

So when my dream job as a full-time fashion designer landed in my lap, I had to take it.

The job was intense and I was overworked and stressed. And the $22k salary they’d talked me down to was tight, but the promise of $25k after 6 months of good performance kept me going.

I was learning loads and I loved it.

“Young girl who dreamed of being a fashion designer since childhood lands first industry job.”

I felt cool. I felt like I made it. I felt like I had the freedom to be whoever I wanted to be in an office that let you dye your hair and wear whatever you want. I experimented with pink and blue highlights, and even went all red:

(Me in front of the office building at my first fashion design job.)

So there I was, red haired, dressing funky and thinking I was all that.

I had to be happy, right?

But after those first bright and dreamy 6 months, things got dark.

The first blow was when I didn’t get my promised salary increase.

I sat across the conference table from my manager wearing the variegated wool sweater my mom had knit. The door was closed and tension was palpable.

I slid the paper across the dark wood table top and started talking through the bullet points I’d practiced for a week. I showed the value I’d brought to the company and all the achievements I’d made.

And I asked for my promised raise.

“I’m sorry Heidi. Judy said I can’t give any raises right now. I know you were promised, but there’s nothing I can do about it. You’re hard working and we value you, but I just can’t do it.”

The words stung. And as much as I wanted to quit, I knew I couldn’t.

That night, I called my parents and complained. I asked Marc what to do. And they all told me to just keep going forward.

Something would work out soon.

The next blow came when the market crashed in September 2008.

I can still picture it clearly in my mind today.

Judy (the owner and the same one who denied me of my promised raise months earlier) came to my desk. Even kneeling down next to me, her stalky 6-foot tall frame and bleached blond bob was overpowering.

Many people in my department had already lost their jobs, but I didn’t see this coming.

“Michael’s been let go. You’ll be taking on his responsibilities and will be managed by Erica now. I know this is hard and it’s a lot to take in.”

And the tears just came. I started bawling, red faced and snot nosed and can’t breathe kind of bawling. In front of her.

I was mortified. I was embarrassed. I felt like a little baby.

But the stress had already been a lot. And it was too much. I just broke.

Michael was my manager and he’d kept me sane this whole time. I didn’t know how I’d handle all his work when I could barely keep up with my own.

What came next was worse. It was insulting and degrading and I was offended.

It was still less than the wage I was promised almost a year ago.

And on top of my existing workload, I was now expected to do the work of someone who’d earned $60k+.

And you thank me with an extra $1/hour?

I knew what kind of car she drove. What kind of house she lived in. The clothes she bought. The lavish executive lunches cost more than my weekly paycheck.

The owner was living the high life and I was working like a dog and grossly underpaid for the responsibility I held and the value I brought to that brand.

But what do you do? What options do you have?

So, I stuck with it.

The recession hit us hard. In total, our 30 person design team dissipated to 8 almost overnight. The 200 person company shrunk to 50.

I was one of the lucky ones (if you can call it that) left standing.

Because the rest of my time with that company was a nightmare.

The owner was vicious and unforgiving and yelled. The office was toxic.

After a few months, the company was sold and we got a new owner. There was a glimmer of light for a minute.

But somehow, things got worse.

More of everything except compensation or compliments or even a “good job Heidi” every once in a while.

I had constant anxiety and a full-time upset stomach.

And I cried. I cried a lot. I continually broke under the pressure and I just crumbled.

It was a vicious cycle.

The responsibilities and the stress weighed heavy on my 26 year old shoulders. And it sure as hell didn’t match up with the $24k salary.

Even though I worked harder and harder, more and more hours, stayed until 11p some nights and arrived the next morning at 7a with dark circles under my eyes, I never earned another cent on top of my base wage.

I had no control and was stuck working on projects I despised and didn’t believe in.

And I began to hate the work.

My love for the fashion industry was dying.

I knew there had to be a better option. I knew my life wasn’t supposed to be like this. I knew life had to mean more than this.

More than showing up for something where you’re overworked, underpaid and not appreciated.

I didn’t want to go back to my own collection. Because I knew there was also more to life than pouring your heart and soul into your dream fashion line only to realize:

I knew I had to make a change.

So I did. And it was the best decision I ever made in my life.

Tomorrow, I’ll tell you what that was. Watch for that blog post.

For a successful fashion design career, do the opposite of everyone else

Breaking Into the Creative Side of Fashion: From Product Development to Designer

If you want to work in fashion, don’t send emails like this
Tags
Categories
< < What Experts Don't Tell You About Launch...
The Painful Beginnings of My Own Fashion... > >
JOIN 23,664 FASHION DESIGNERS (and get my best AI shortcuts!)
©2008-2023 SuccessfulFashionDesigner.com