SFF163: Why Undercharging Is Killing Your Freelance Career 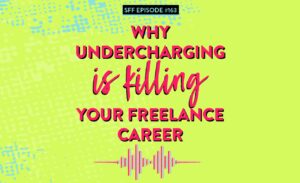 SFF163: Why Undercharging Is Killing Your Freelance Career

Setting your rates is one of the hardest aspects of freelancing, and it might be holding you back. Such was the case of Chad Robertson, a freelancer who was severely undercharging for his services in the book editing and formatting industry. After Heidi hired him for a freelance job to edit her first book, Chad followed her advice to raise his rates and turned his annual earnings from $20,000 a year to a whopping $100,000!

In this episode, we discuss how Heidi found Chad through his niche, the conversation they held about his rates, and how that turned his earnings into a 6-figure income. While it’s not the fashion world, Chad’s story is inspiring and relatable for all freelancers as he had to overcome mental barriers to raising his rates and finding the confidence to charge what he was worth.

TRIGGER WARNING: Chad discusses his early career as an immigration paralegal and touches on sensitive topics including severe poverty, suicide, and family separation. To skip this conversation, start listening at 11:50 into the episode.

Or read the full transcript here!

Chad Robertson is a freelancer who helps authors, coaches, and executives design and publish best-selling books. He started out as an immigration paralegal that turned to freelancing in the book editing industry, and met Heidi after she hired him not once – but twice – to edit her books on fashion freelancing. Now, Heidi brought him on the podcast to discuss his freelance journey and the steps he took to nearly quadruple his income.

Loved this episode? Don’t miss these other episodes featuring freelancing without industry experience:

SFF154: How She Became a Freelance Fashion Illustrator + Designer (and sent a $4500 invoice!)

SFF155: Fashion Freelancer Q&A: I Have 15 Clients and Am on the Struggle Bus