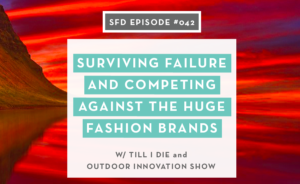 “But I’m just one person. It’s hard competing against huge fashion brands out there?”

It can feel really hard to launch your fashion line when you’re just one person. Which is why you have to persevere and you have to find support somewhere.

And I know I sound all fluffy inspirational here…which is pretty out of character. I’m known for tactics and strategies and actual “how to’s”.

So stick with me!

Because in this episode, we talk about how to do all these things.

The first time Ryan launched his brand, Till I Die, it failed. He was forced to return to corporate America.

The second time? He’s succeeding. But it hasn’t been without said perseverance and support.

So, how is he making it all happen?

He works is ass off. He knows which friends have his back and which ones he needs to cut lose. He knows that to get a single “yes” from a buyer, he has to get THIRTY “no’s”. He knows how quickly costs add up and that may mean surviving on $20k a year and eating Ramen.

Ryan also knows how hard it is competing against huge fashion brands.

He and I met on the trade show floor of Outdoor Retailer when I showed up with my recorder and did impromptu interviews with 9 brands. And he told me outright how hard it was to compete in sis small 10×20 foot booth that was swallowed by the 100×100 foot / two-story / monstrous booths that the big brands spend millions on.

Which leads us to the second guest on the show, Nick Eliason of Outdoor Innovation Show. I also met Nick on the trade show floor, and what he’s doing with OIS is soooo cool.

The fashion industry is shifting.

How product is created is shifting.

And how you reach the end consumer is shifting.

But the trade show model has stagnated. And for a lot of brands, it isn’t working.

So Nick and his team are reinventing the trade show model so it’s more inline with how the fashion / retail / direct to consumer space has shifted. It’s designed to help us all work together to create amazing product and get it to the people who need it most: our customer.

You’re going to love both of these interviews. Here’s a sneak peak of what we talk about:

Help us out by:

Save this “Surviving Failure and Competing Against Huge Fashion Brands” episode to Pinterest so you can find it later:

SFD040: Behind the Scenes with 7 Fashion Industry Professionals

SFD071 A Fashion Design Dream Come True: From the Honduras to NYFW, With Guillermo Irias